When the Sámi became a threat to the king

In the cold, dark dungeon of the fortress lay a man chained to the heavy timber wall. Morten Olsen Finn was nauseous after days of lack of sleep, and in pain after that morning’s interrogation. As the heavy timber door swung open, the telltale smell of damp homespun wool as well as a faint whiff of spring seeped into the room.

He noticed the sound of strange voices. How many were there? He turned slowly so the rough floorboards wouldn’t scrape open the wounds over his ribs. His coat, the traditional Sámi gákti that he had used as a pillow, was caked with blood and stuck to the floor. He squinted against the sudden presence of light, and could just make out that the tallest and youngest man in the group backed up in disgust at what he saw in the darkened room. Morten felt shame. Here he lay, in irons on the filthy floor planks, stripped of clothes, his hair a matted tangle, his body covered with bloody wounds and his own excrement. He forced himself up into a sitting position and examined the men who had stood around him, each of them wearing lace collars.

Morten wanted to be the first to speak, a vain attempt to hold on to a scrap of his dignity, which had been draining away like body fluids onto the floor. He opened his eyes fully.

“It wasn’t me who caused the boat to sink. I don’t use sorcery. Our Sámi medicine is not evil. I only help people who need help. Sick people are to be assisted!”

Morten noticed that his voice was strained and sounded lighter than usual. Still, he continued to speak as he stared up at the men. They had come closer, trying to understand what he was saying.

“You foolish men with your Danish tongue should not decide here!”

His sharp tone and strange accent seemed to make the men uncomfortable. For Morten, their hesitation felt like a tiny victory. A brief moment where the balance shifted and he had the upper hand. That gave him a speck of courage and strength, even though he knew they would strike back.

The youngest man with the biggest hat took a step forward. He stood straight, staring down at the prisoner.

“You really believe that?” he replied, adding in his refined Danish: “Then who do you think should make the decisions in our long and large double kingdom? Peasants? Women? Or perhaps a dirty Lapp like you?”

The other men laughed long and hard at the joke. Morten Finn looked up at the men in wide-brimmed hats. Contemptuous faces and fancy starched lace ruff seemed to dance before his eyes, and their laughter filled his cell.

He was filled with such rage that it drove his pain away. He lashed about with arms that were chained to the timber wall, and he fixed his eyes on the young man who had spoken. His mouth was filled with burning words that had to be spoken.

“While we sacrifice animals, you, devil king, sacrifice men!” He shouted out the words, and spat saliva that was red and brown at their Captain-General.

Then men from Copenhagen fell silent, glancing at their superior before staring back down at the prisoner. None dared speak, not that Morten was waiting for an answer. Instead, he rolled up on the floor and fixed his eyes on the tiny opening high on the wall; it was nailed shut. But through a tiny knothole came a finger-thin beam of light. It shone at a sharp angle, glancing the lower wall beams and illuminating a spot on the floor. Morten gazed down at that spot of light, sank into himself, and resumed wailing.

The men were tense, waiting for the response to this attack on the Captain-General, who was lost for words. On this visit he had used only the name Christian Frederiksen, as though he were a typical nobleman with the rank of captain, but that was hardly the case. In fact, Christian Frederiksen was one of Europe’s wealthiest and most powerful kings, with sovereignty over not just the double kingdom of Denmark-Norway, but also over Iceland, the Faeroe Islands, Greenland, and the duchies of Schleswig and Holstein. He had sailed north incognito to investigate the state of affairs in the far north, and to make plans for his kingdom’s expansion.

Before departing from Copenhagen, he had given strict orders that should anyone on his convoy of ships refer to him as anything other than General Captain Christian Frederiksen, or in any other way disclose who he really was, their punishment would be death by hanging at the yardarm or the headsman’s axe. Now he faced a prisoner who dared to insult the King, which was a capital offence in itself. Worse, somehow the prisoner had seen through the disguise to his real identity. Christian was speechless. How could this wretched creature in this cold desolate outpost know who he was? Had he not snarled and bared his teeth at him? And wasn’t that pure evil radiating from his dark eyes? Was Christian confronting the devil himself in human form, as he had feared before entering the prisoner’s cell? Christian spun on his heels, and with bowed head left without another word. He found himself trembling, shaken to his core. The other men followed quickly.

In the dazzling light of the fortress courtyard, some of the officers of the royal ship waited patiently with Hans Olsen Kofoed, Lord of Vardøhus. King Christian pulled Kofoed aside, while trying to keep his hat from the being grabbed by the icy wind that swept inland.

“This prisoner is kin of evil sorcerers!” Christian was still in turmoil after the indignity and humiliation he had suffered inside the dungeon. “Make sure you bring him to justice as soon as you can!”

“Of course,” replied the lord humbly and bowed before his king. “I shall call council as soon as the bailiff and the magistrate return to Vardø. We expect them back in a week’s time. Then justice shall be meted out to Morten Finn.”

Christian said nothing. Instead, he turned his back, leaned against the low fortress wall, and stood staring out over the sea. A dark ocean seemed to surround this remote land that he had travelled so far to see with his own eyes. He contemplated the new Dutch sea charts, commissioned by Sweden, Denmark’s archenemy. These charts, which had already been spread far and wide across Europe, claimed the entire area from Tysfjord to Varanger as Swedish! It was an affront that filled Christian with fury. The Swedish claim was an intolerable attack on his honour. The competing aim was clear; foreign ships meant to usurp his wealth and sneak past Vardø without paying Denmark her customs duties. Even though the King had had a lord stationed at Vardøhus for over 20 years, neighbouring countries had yet to recognise Danish sovereignty.

The rulers of Russia were increasingly aggressive. This Godunov, who had just been named Tsar, was particularly worrisome. He was obviously keen on further expansion in the north. But it was just as bad that the Sámi and their sorcerers were claiming the land and undermining his royal authority from within. No wonder it was difficult to get civilised people to settle up here. If he hoped to hold his northern territories, there needed to be Danes and Norwegians all along the coast, and on the fjords that extend inland. The obstacles to Danish colonisation must be removed, and the barriers to the settlers’ motivation had to be swept away, lest his kingdom be vulnerable to attack.

As always when he was upset, Christian yearned for good food and beer. Fortunately he would soon be back home in Copenhagen, with its fine ingredients and chefs who were at his service. However, he would also have to endure the tiresome meetings of the Dano-Norwegian Royal Council. He sighed and pushed his cold fists deep into the pockets of his breeches. To his frustration, the members of the Royal Council failed to understand the importance of securing the northern territories for the crown. Or perhaps they refused to understand. It had been a long time since Denmark-Norway had openly been at war. In recent decades the Royal Council under his father King Frederik II had used all its resources to develop the kingdom.

“Everyone knows that war swallows a lot of money, and no-one ever knows how or when a war will end.” That was the objection raised by one council member or another every time Christian presented his plans to expand the kingdom. He found the Council’s refusal to listen quite provocative. He was their King, damn it! He comforted himself that in the future – and soon – things would be very different. Nations were restless; Sweden grew ever more threatening as it gained military strength. Surely his obstinate, self-serving, avaricious nobles would soon be forced to accept what he, King Christian, could see so clearly.

Christian faced the northern wind and drew an icy breath, pulling the brim of his hat as low over his ears as he could manage. For a long time he had been aware that he needed to sort out the conflicting border claims for the northern territories. Now he finally envisaged a way forward. He turned abruptly, and with an energetic stride stepped towards Kofoed, then leaned forward and spoke so close to his ear that the lord jumped.

“If you ask me, the northern territories are full of sorcerers!” Christian sneered. “Beware, Lord Kofoed! Should we fail to stop them, they will devour our land and our people, and wrest power from our hand. We don’t want devil worshipers taking over the kingdom, do we?“

Lord Kofoed turned his head away as much as he dared. Admittedly he found the situation alarming, but he still thought the Captain-General was greatly exaggerating the threat. Nonetheless, Kofoed stepped back, bowed deeply and swept his hat to the ground in front of Christian; after audiences in Copenhagen, Kofoed was quite aware who he really was.

“Thank you for your wise thoughts, Your Majesty,” he replied lowly. “I shall exercise the utmost caution. May God be with us all!”

Christian straightened his back and gave Kofoed one more brief glance, before turning around and walking away.

This is an excerpt from a longer version of this story, which is based on real events and real people. The Sámi prisoner Morten Olsen Finn was convicted of sorcery and burned at the stake in 1601. Author: Ann-Jorid Pedersen 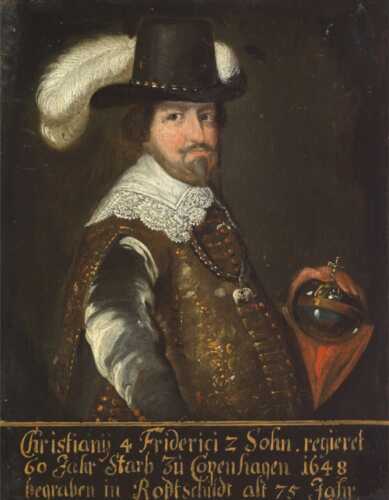 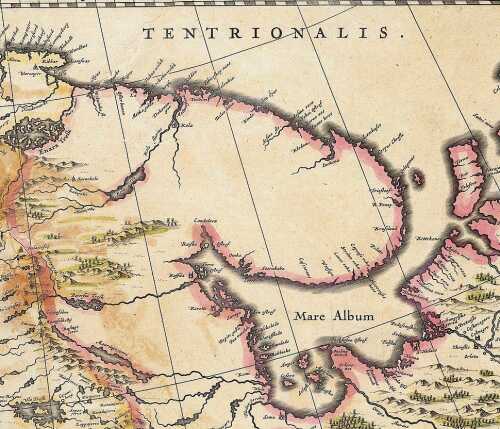 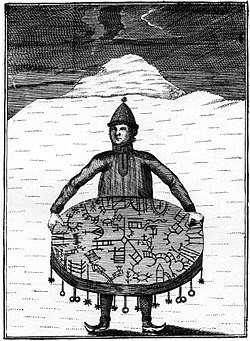